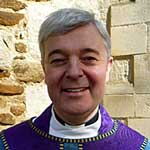 This morning at our Eucharist Service I made an announcement about our new Vicar. For those of you who were not able to be with us this is what I said:

Last October a group of PCC members met to start the process of writing the Parish Profile, the document which would be sent to priests interested in coming to St John’s. At the same time we all began to pray that God would send a priest to fit our parish, that the priest would hear and respond to that calling, and the interview panel would understand that calling.

Everyone worked hard, praying and perfecting the Profile. There were several priests who applied and four were invited to meet the panel, consisting of the Area Dean, the Archdeacon, and Gary and I representing the PCC.

The day chosen to meet them was the beginning of the pandemic and everything was cancelled. It was not until the end of May that we decided to arrange a Zoom interview of the four priests. On completion of the Zoom we all felt that one priest was, without any doubt, being called by God to serve Him here. We wanted to meet him and his wife face to face and as soon as that could be arranged they came to Midsomer Norton for an introduction to the Church, vicarage and school, and an interview. We all remained certain of his calling to St John’s and the Archdeacon offered him the post which he accepted. On behalf of the PCC, Gary and I are delighted to announce that our new Vicar will be the Revd Guy Scott. Guy is currently Vicar at St Andrew’s, Biggleswade, Bedfordshire, a parish he has looked after for ten years. Prior to that he had parishes in Cornwall and also on the Scilly Isles. Some of you might remember him in the television series called ‘An Island Parish’.

Guy is married to Kate who is also ordained and they have two daughters. He has sent me this message to read out today:

“I am so delighted to be joining you. I look forward to getting to know you all and becoming part of Midsomer Norton’s story. I hope that we can meet together with some semblance of normality before too long. I pray for you all as we begin our journey with God together”.

Guy and Kate are hoping to move into the vicarage at the end of October and he will commence his ministry here early in November, subject to a satisfactory completion of the usual statutory checks made on all clergy taking up a new post.

I want you to know how supportive and encouraging the Archdeacon and the Area Dean have been. At no stage did Gary and I feel that we were being led away from our conviction about the appointment.

Whilst I tell you about our good news, Guy is telling his congregation that he is leaving. Please pray for his congregation as they come to terms with his departure and with the tasks we have been undertaking here in the last 11 months. And please pray for Guy and Kate as they pack up, and for us here as we prepare to welcome them.

Blessings to you all,